In collaboration with Nordic Green Solutions, the company HAI Horsens A / S has completed many energy saving projects, including energy optimization of glassblowing equipment and ventilation systems. The gain is a reduced energy consumption that strengthens the company’s economic and environmental bottom line.

HAI Horsens A/S specializes in surface treatment of aluminum and has since 2014 collaborated with Nordic Green Solutions on ongoing energy optimization of production in Horsens.

“Nordic Green Solutions has helped us realize several good energy saving projects. We have found that other energy consultants have a very theoretical approach to energy optimization. This is not the case at Nordic Green Solutions. Here, the consultants are based on production and challenge us on our own ideas, so we end up with the most optimal and profitable energy saving project “, says Jan Køpke Rohdemejer, CEO of HAI Horsens A/S.

One of the latest energy saving projects that HAI Horsens A/S has implemented in collaboration with Nordic Green Solutions is energy optimization of some of the factory’s glassblowing equipment.

HAI Horsens A/S has so far used compressed air as a propellant for blowing items into glass, but compressed air is not very energy-friendly for the purpose. Therefore, the company investigated possible alternatives and found a system where it is possible to blow glass without the use of compressed air. This system roughly works by placing the items to be glass blown on a fixture in the system. The fixture is brought into rotation, whereby glass particles are sucked up into the plant, where the workpieces rotate at high speed through the glass particles. The small electric motor that drives the rotation of the fixture has a much smaller energy consumption than compressed air. As a result, energy consumption has fallen below 10% of what it was before.

“In connection with the energy optimization of our glassblowing equipment, Nordic Green Solutions performed calculations of the energy savings and applied for energy saving grants for the project. We do not have the time to make the necessary calculations and documentation ourselves, so it is crucial for us to have a partner who can ensure that the energy saving project is realized with a grant for the investment,” says Jan Køpke Rohdemejer.

When HAI A/ S acquired a German factory in Kurtscheid, which also specializes in surface treatment of aluminum, it became clear to Jan Køpke Rohdemejer what significance ongoing energy optimization has actually had for the energy costs of Danish production and thus competitiveness.

”At the factory in Kurtscheid, energy optimization has not been high on the agenda. Eg. there is no or minimal control of cooling and heat in production, which results in a lot of energy waste – and this can be felt on the energy bill. HAI Kurtscheid spends 12.6% more of its turnover on electricity, gas and oil than it does in HAI Horsens,” says Jan Køpke Rohdemejer.

According to Jan Køpke Rohdemejer, if energy optimization is to create the greatest possible value, it is a matter of thinking about the whole rather than the individual energy-saving measures. This is where the synergies arise – and there are plenty of examples of this in Danish production.

“We have just installed three painting booths in a newly established building, and here we have given high priority to energy-efficient solutions. We like to invest extra in a more advanced control for the ventilation system when it means that the ventilation is automatically regulated according to various factors in our production, and we can thereby minimize energy waste,” says Jan Køpke Rohdemejer.

He also emphasizes that energy optimization is important for HAI A/S ‘competitiveness as a sustainable supplier.

“There is an increasing focus on the sustainability of the end product, and this places demands on us as a supplier. However, it is important that a green philosophy makes sense. Of course, we focus on reducing our impact on the climate, but it is necessary to invest in the profitable optimization projects, which also create value for our economy and production processes. This is where targeted energy optimization together with Nordic Green Solutions plays an important role,” says Jan Køpke Rohdemejer.

Feldborg Savværk and Pallefabrik has a large consumption of heat, which mainly goes to drying wood in the drying rooms. As part of saving energy, the drying rooms have been implemented with a stop & go function.

A review of Indulak’s energy consumption shows that 65 percent. of their CO2 emissions take place in connection with production, ie. washing, drying, varnishing and curing of the items. 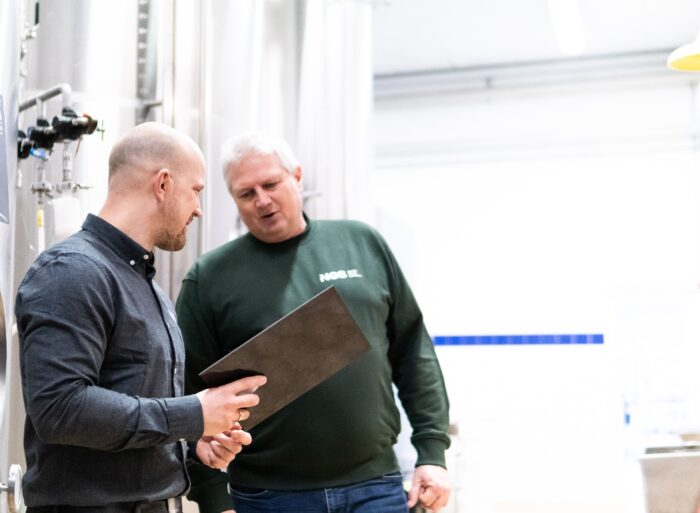 Refrigeration and freezing processes are energy-intensive, but at Aabenraa Frysehus, an old condenser without an automatic venting system resulted in an unnecessarily high electricity consumption for the compressors.